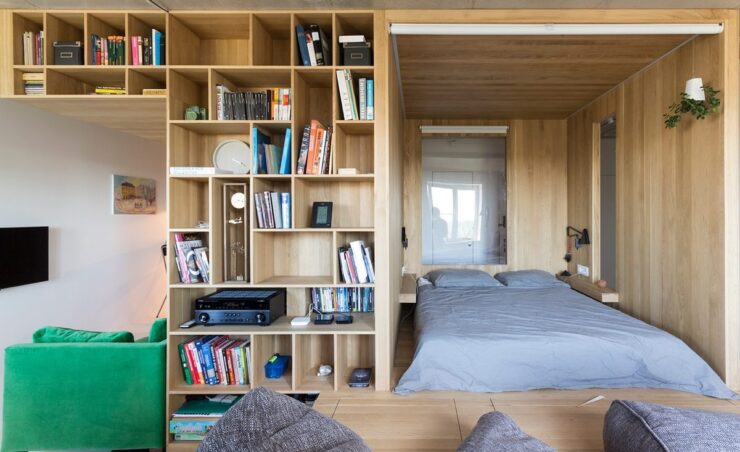 How to place everything you need for life on a small living space? It really doesn’t matter what size your apartment is. It’s all about organizing space. In different parts of the world, people manage to live comfortably on 20 or even 10 square meters. Don’t believe me? Let’s see real examples from the life of one of the most interesting and mysterious countries – Japan.

This country is located on islands, of which 60% of the area is forest. At the same time, the population there is as much as 126 million people. Imagine how densely populated big cities are! In such conditions, the Japanese are simply forced to optimize the space around them in order to get by with a small area.

For example, they invented single-seater cars that only take up half of the parking space!

Capsule hotels for Europeans still seem exotic, but for the Japanese, it is a common thing. Such “cabins for one night” appeared there back in 1979!

A little earlier, in 1972, the architect Kisho Kurokawa invented his famous capsule tower. This building houses both offices and living quarters. Each compartment contains everything you need, occupying only 10 square meters.

Lovers of minimalism and order will love this spaceship-inspired design. The kitchen and storage system is a single wall-to-wall structure from floor to ceiling. Nothing superfluous in sight, for each thing – its own department.

Live plants and textiles will help to slightly dilute the “Spartan” atmosphere. Even 10 square meters will seem like a luxury in comparison with this magnificence – quite a typical apartment in Tokyo with an area of 8 square meters! The secret is that the height of the ceilings allows you to build a second tier and place a bed there. The small kitchen is nestled in a niche and occupies exactly 1 meter. This is enough for a sink and a single-burner stove.

Similar micro-kitchens are not uncommon in Japan. One of the most densely populated areas of Tokyo has a population density of more than 7,200 people per square kilometer. If your kitchen is a little over 1 meter long, you may be in luck. The main thing is to use all the available space wisely.

You can artificially enlarge and expand the working area with the help of pull-out surfaces, use hanging shelves and storage hooks on the back of the kitchen cabinet doors.

Often kitchen furniture is located in the corner, with the letter “P”, while the corner space is not very suitable for storage. Special corner drawers or pull-out shelves will solve this problem.

In the same apartment in Cebuya, the area of a bathroom is comparable to an airplane toilet, but everything you need fits here. The toilet cistern is hidden in the closet above which you can store your toiletries. The mixer on the sink is positioned so that it can be turned towards the bathtub and filled. From it the shower hose goes to the bathroom. Although in fact it is a shower cabin without a door, which is replaced by a curtain.

By the same principle, in bathrooms a little more, you can successfully store many more things than it might seem at first glance. The space above the toilet or under the bathroom is equipped with drawers, which can be made to order according to your size. From the outside, it looks like a small cabinet that does not take up extra space, but inside it is everything you need. The main thing is that there should be a place in front of it where to put it forward.

Any standard door also needs empty space in front of it so that there is room to open it. Sliding doors are easier. In order to optimize space, the Japanese have moved sliding doors from classic Japanese interiors to modern dwellings.

There is one interesting piece of furniture in classic Japanese interiors – tansu. These are chests that were stacked one on top of the other. They kept especially valuable things of the family, which in case of fire or earthquake could be quickly taken out of the house.

Such “chests” are usually under the stairs, where you won’t sleep and you won’t install a large rectangular cabinet. The plus is that individual blocks can be combined. You can arrange them as you want and store things in them by category.

By the way, about things. Mari Kondo, a Japanese writer, and housekeeper gained worldwide fame with the release of her book Magical Cleaning. In it, Kondo talks about how to fold things efficiently so that they take up less space and are always easily accessible. For example, it is better to fold towels and knitted sweaters in vertical piles – this way it is easier to remove them without ruining the entire structure.

It is suggested to roll socks and underwear into tubes and store scarves and belts on hangers. It would seem that all these are trifles, but such trifles make up a comfortable environment in the house. As they say, the order in the house is order in life.

To create all this splendor, there are special helpers – textile boxes and dividers. You probably know about them from IKEA, but these containers can be purchased at many home improvement stores.

Place under the bed

The same Marie Kondo advises not to get hung up on large storage systems. Especially if there is no room for them. If the modest size of the apartment does not allow you to place a large closet or dressing room, use the space that is usually empty and idle. For example, under the bed could be drawers. To find some really gorgeous storage beds you can go to Nyfurnitureoutlets.

Items that don’t need to be accessed every day can be stored on the podium.

And if you have a large room in which you need to combine several zones, build a whole storage complex around the bed. It is both cozy and practical.

Following the same principle of zoning a single space, the Shikara Ono project in Kanagawa, Japan was created. In the center of the room is an “island” with shelves and drawers on top of which you can sit. And inside, behind the partition, there is a bed, hidden from prying eyes. Thus, one studio apartment has everything you need for life. And thanks to competent zoning, there is no need to redevelop with the construction of new walls. Moreover, each zone looks completely isolated and comfortable for life.

In preparing this article, we were faced with a “harsh reality”: in fact, most of the apartments of ordinary Japanese are either mercilessly littered with a huge number of things that simply have no place to store for 20 square meters, or look like uninhabited apartments for rent for a day. In order not to be in any of these extremes and to coolly equip your little cozy nest, borrow ideas from this article, pay attention to the little things.

How Covid-19 Has Caused Us to Be More Environmentally Friendly?

3 Waste Disposal Problems And How To Solve Them

Sports Betting in Greece – How To Stay Safe

Top 6 Things to Gift for Parents