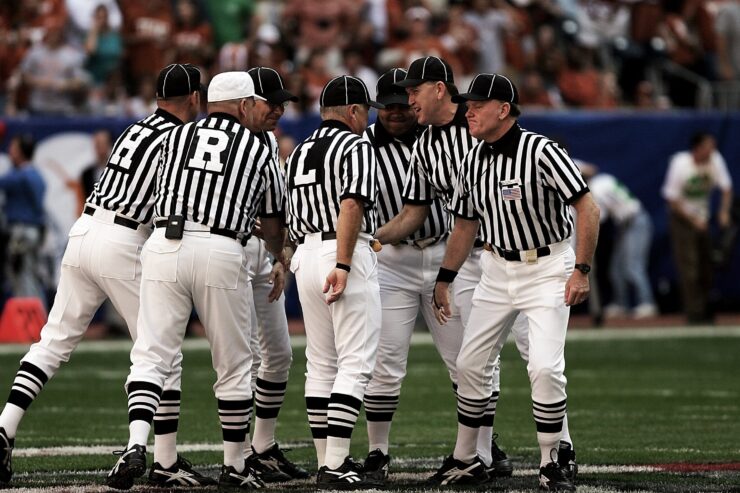 Making it in the world of professional sports is tough, with only the most dedicated and talented athletes being capable of making a living from their passion.

The same can often be said of the men and women who officiate such sports, as they often are required to go through rigorous training regimes in order to even be eligible to referee, umpire, or facilitate an elite-level match or game.

Here we delve deeper in the worlds of professional sports’ elite officials, as we go in search of those sports where the officials have to be almost as dedicated to their craft as the players themselves.

Rugby umpires are required to pull up their socks and display a stiff upper lip more than almost any other sports referee or umpire.

This is because the game they officiate is so brutal that the wrong decision can lead to a fight breaking out or a player getting injured in a scrum. This means that both rugby union and rugby league referees are usually ex-players, who have an inbuilt fitness and knowledge of the game that earns the respect of the men or women they preside over.

At any live poker tournament there are two important officials to look out for. These are the tournament referee and the dealer. The former is there to adjudicate whenever there is a disagreement between players, or someone has an issue with the way a tournament is being run. The dealer is there to ensure that a game runs as smoothly as possible and that the rules are followed at all times.

At large professional events there are whole teams of dealers who run multiple tables across an open-plan venue, with the referee overseeing the action. According to Zipia or PokerStars, a dealer’s job is particularly taxing because they have to display stamina across long 8-12 hour sessions, all the while being fast and accurate so that players get the most out of their tournament experience.

During a hand, the action is controlled by the dealers. Prodding players to act, verbally proclaiming their actions to the rest of the table, and punishing players who act out of turn are all examples of this.

A poker dealer also has to be able to switch codes at the drop of a hat, because there are many different variations of poker that players may want to partake in, which adds a whole new difficulty level to the job.

Ice hockey refs do not have to be quite as mentally agile as poker dealers, but they certainly do have to be nimble on their feet, not least because they spend the whole of a game skating around the ice.
This means skating backward without losing balance, breaking up fights as pucks and sticks fly, and trying to keep track of how many players are on the ice at any given time.

In all timed sports, it has the most significant percentage of significant gameplay. As a result, there is more skating and more watching/officiating than in any other sport with no pause. It takes years of work to be able to skate and pay attention to the things you need to watch in hockey. Not to mention the call rules and the speed with which you must absorb all of the information. Hockey referees skate 5 miles every game while keeping an eye on the players’ actions, the puck’s placement, and anything else that may occur on the ice.

Perhaps the roughest of all these officiating pursuits is being a referee in a boxing or MMA bout.
This job comes with a huge amount of responsibility because the well-being of both fighters is ultimately in the hands of the referee. It is also not unheard of for a referee to take a shot on the chin themselves as they go about breaking up a clinch.

For pure kilometres covered, Aussie Rules refs are hard to beat, because they have to span a vast amount of ground during a top-level Aussie Rules game.

Over the course of a game, they can cover anything from 12km to 15km. That is like doing marathon training every time you take to the field of play!

Similar to poker dealers and referees, the officials in darts are required to work in tandem, with the scorer doing the math in rapid time and then relaying their information to the caller, who vocalises the score to the live crowd.

This job requires expert timing and a deep sense of knowing how to play with the emotions of the crowd without disrupting the flow of a game. It also helps if the caller is an MC with a gravelly voice, who can rumble “ooooone hundred and eighty!” at the top of their lungs.

In basketball, an official (commonly referred to as a referee) is in charge of enforcing the rules and keeping the game in order. Scorers and timekeepers, as well as other professionals who actively participate in the game’s upkeep, are referred to as officials. Basketball is considered one of the most challenging games to officiate due to the fast pace of play, the intricacy of the rules, the case-specific interpretations of the rules, and the need for quick decisions.

Despite the widespread belief that basketball is a non-contact sport, officials sometimes fail to call a significant amount of marginal or incidental contact. An official must always be aware of not only what is going on around the ball but also the roughness of play that is going on all around the court, which adds to the official’s work.

In football (soccer), the referee must run faster than the players for 90 minutes at a steady pace, despite being older and less fit. They must make decisions while moving in a fast-paced game where nearly every rule judgment is preceded by the phrase “in the view of the referee” (in other words, the audience will not see what the referee sees). And they had to do it all while wearing shorts in dreadful weather.

In any sport, being an official plays a critical part. Officials are compelled to perform on every play — and are frequently expected to hustle to get into the appropriate positions to make fair calls — while players are allowed to take pauses by entering and exiting games.

Most sporting events would not be able to take place if officials did not volunteer their time. They give participants with leadership and supervision, ensuring that the competition is run safely and fairly.

Online Casino Streams: What You Should Know